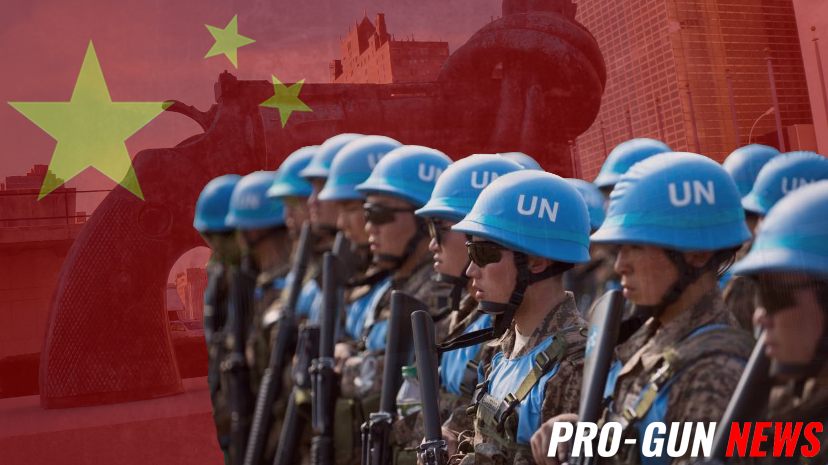 U.N. Troops by N/A is licensed under Pro-Gun News N/A

In an alarming development, the Communist Chinese have become the largest funder of the U.N. Small Arms Treaty, according to their latest contribution report.

After the U.S. was added as a signatory in 2013 due to the actions of then-Secretary of State John Kerry, it has been strongly opposed by gun rights supporters.

And following pressure from gun owners, largely led by the no-compromise gun rights organization the National Association for Gun Rights, then-President Donald Trump announced he was removing the U.S.’s signature from the gun control treaty.

While that move was largely symbolic, with other member nations continuing to refer to the U.S. as a signatory, it sent a loud message to the world; a message that the Chinese Communist Party took near-immediate notice of.

While China has been a signatory of the treaty since 2013, they had not fully joined the treaty until 2019, shortly after Trump’s announcement.

After joining the treaty, China made it clear it was in response to Trump’s announcement, with their U.N. ambassador, Zhang Jun, lamenting that a “certain country” had “walked away from international commitments, and launched acts of unilateralism and bullying.”

This should alarm any pro-gun American.

In an email to supporters, President of the National Association for Gun Rights, Dudley Brown, sounded the alarm on this development:

“All President Biden has to do is sign back onto the treaty and let Communist China take the reins in this global gun control scheme designed to ultimately bring the U.S. to its knees and DISARM American citizens,” Brown warned.

Biden has previously voiced support for the treaty. Most ominously, he told the U.N. General Assembly last year that the United States is committed to “Treaty Universalization” and to “review specific arms transfer issues, including determining the proper relationship of the United States to the Arms Trade Treaty.”

If fully ratified in the U.S., leading gun rights figures warn that it would bring extreme gun control with it. Sen. Rand Paul has warned that it would force the U.S. to enact “tougher licensing requirements,” confiscate and destroy all “‘unauthorized’ civilian firearms,” ban the “trade, sale and private ownership of ALL semi-automatic weapons,” and create an international gun registry.

If you oppose the U.N. Small Arms Treaty, click here to sign up for Pro-Gun News email alerts to stay up to date on its, and any other gun controls scheme’s developments.

U.N. Troops by N/A is licensed under Pro-Gun News N/A