Reps. Massie and Greene: Abolish the ATF, Repeal the NFA 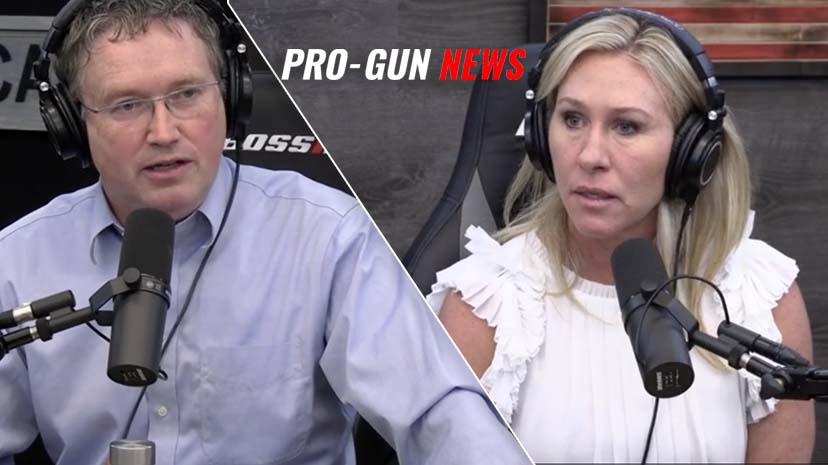 Reps. Massie and Greene by TimcastIRL Podcast is licensed under Rumble N/A

During a discussion on the TimcastIRL podcast, pro-gun Reps. Marjorie Taylor Greene and Thomas Massie called for an end to the Bureau of Alcohol, Tobacco, Firearms, and Explosives (ATF) and the National Firearms Act (NFA).

The ATF of course, is the enforcement arm of the gun grabbers in Washington, who carry out the orders of anti-gun tyrants like Joe Biden. The NFA, signed into law in 1934, is among the beefiest gun control measures on the books today, making entire classes of firearms heavily if not forbidden all together, including fully automatic firearms, short-barreled rifles and shotguns, and firearm suppressors.

Massie responded back pointing out the reason the Second Amendment exists to begin with.

“The government doesn’t have a monopoly on force, like it did in every other country,” Massie began. “The people have the right to bear arms in our country.”

Massie posed the question: “Why is that?” before answering it himself:

“It’s so that tyranny can’t prevail in this country.”

Both Green and Massie aren’t just talking smoke. They have both made abolishing he ATF a policy priority.

Rep. Greene filed the “Brian A. Terry Memorial Eliminate the ATF Act” last year to abolish the ATF, along with all ATF regulation regulations. Massie signed on as co-sponsor.

Reps. Greene and Massie are truly among the most pro-gun politicians ever to roam the halls of the Capitol.

Click here to watch the entire segment about the ATF and NFA on TimcastIRL.

Reps. Massie and Greene by TimcastIRL Podcast is licensed under Rumble N/A